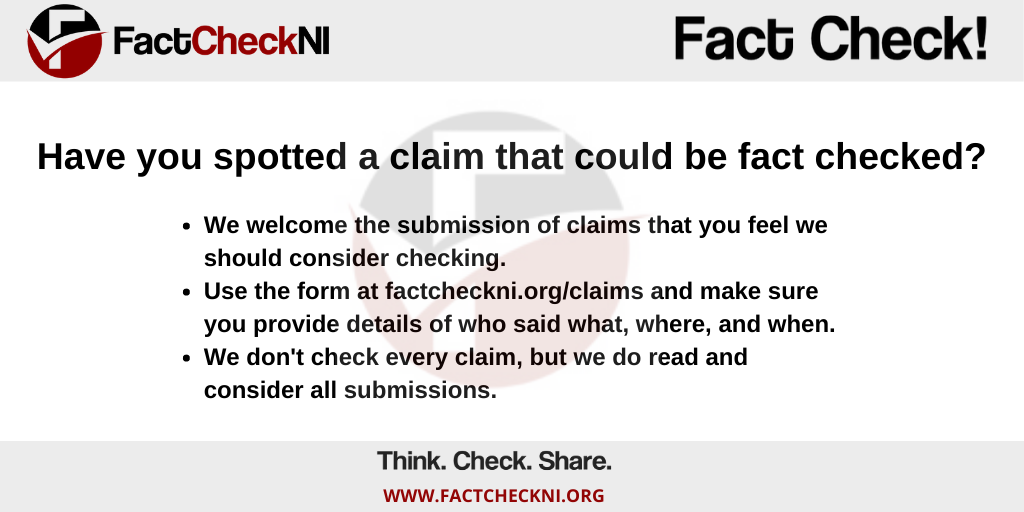 Has a person or an organisation made a public claim about something and you wonder if it’s accurate and feel that we should consider checking it out?

FactCheckNI welcomes the submission of claims through our online form below or by email.

We can’t promise to fact check every claim that is suggested, but we do promise to read and consider all submissions. It is helpful if you can provide as much information as possible — such as date, source, and any particular reason why you’re sceptical of the claim.

Lots of claims turn up in reports and political manifestos. Claims can be made by people writing in newspapers or online — including on social media — or while speaking in the broadcast media, parliaments, or conferences. We have even checked claims made on advertising billboards.

FactCheckNI usually researches claims by checking against publicly available sources. We generally check specific claims that have been made by an identifiable person or an organisation.ran

We ask ourselves two questions regarding claims:

While the accuracy or inaccuracy of many claims can be analysed, sometimes the evidence is not there to validate or refute what has been said and we will conclude that a claim is unsubstantiated.

Sometimes we will investigate a topic that is in the news, to provide additional context to eliminate confusion rather than responding to an individual, explicit claim. These explainer articles are an effort to walk readers through more complex claims and topics that are educational and informative, but cannot be so easily reduced to the simple indication of accuracy or inaccuracy in our verdict system.