> Do 38% of students have to leave Northern Ireland?

Do 38% of students have to leave Northern Ireland?

CLAIM: 38% of students have to leave Northern Ireland at age 18 for higher education.

Most recent data show a third (33.5%) of school leavers continue studies outside Northern Ireland. While public investment policy in further education is a significant factor, others must be considered, such as the desire and ability to take up opportunities elsewhere. Thus it is misleading to say that 38% have to leave; some leave because they wish to.

In an article published by the Belfast Telegraph on 30th May 2016, Vice-Chancellor Patrick Johnston stated: “Some 38% of students have to leave Northern Ireland at the age of 18; that’s a really serious situation for any society because in particular your most talented people are leaving.”

UCAS provide data from 2006-2015, which shows a pattern of student acceptances to Great Britain higher education institutions running between 31-38% per year: 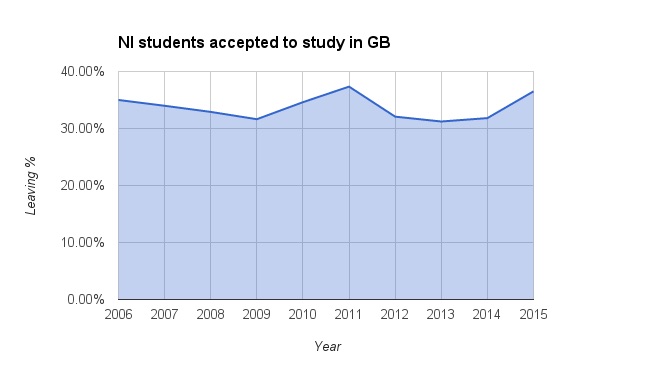 Acceptances are different than enrolment. Figures from NISRA published in May 2016 indicate that of the total 9,459 school leavers in Northern Ireland in the 2014-2015 period pursuing further education, 6,289 (66.5%) continued their studies at a Northern Ireland institution, whereas 2,866 (30.3%) students made the move to an institution in Great Britain, and the remaining 304 (3.2%) moved outside of the United Kingdom (UK) for higher education (i.e. 33.5% leave Northern Ireland).

In the Belfast Telegraph article, Mr Johnston blamed declining government investment in higher education, describing the reduction in its subsidy from the Northern Ireland Executive between 2010-2014 as a 24% cut in real terms.

Similarly, cuts to the education budget (£89 million in the 2010/11 academic year to £70.7 million for this year) have also led to Ulster University’s plans to cut student numbers by 1,200 and staff by 210. Consequently, there have also been plans to discontinue over 50 undergraduate degree courses through Ulster University’s four campuses.

Education budget cuts are being experienced also in Scotland, while in Wales, £31 million of planned cuts were reversed by its finance minister. Overall in the UK, public spending in education has proportionately increased for primary and secondary schools, and decreased for higher education.

It is important to look at other factors influencing the emigration of students.

The review also highlighted a finding by the Department of Work and Pensions (DWP) that middle-class families have been better able to take advantage of increasing educational opportunities; and that working-class children and families’ decision making is affected by a range of factors such as risk aversion, which make them more conservative in the choices that they make.

And the changes in student financing will affect migration behaviour.

Mr Johnston’s quoted figure of 38% is within the recent range of Northern Ireland students being accepted/enrolling in higher education institutions in Great Britain and Ireland.

However, it is misleading to say that 38% of students have to leave Northern Ireland for further education. Government policy will directly impact some students, but other factors influence this decision, including one’s socio-economic status and own volition to seek opportunities elsewhere.

Do far more young people in Northern Ireland have no qualifications, compared with peers in England?

CLAIM: Based on figures from 2015, an average of 6.3% of young people across the nine regions of England had no qualifications - compared with 10.4% of those in NI.

This statistic is accurate, based on analysis from a recent research paper. However, its use lacks some context – in particular, about NI’s “brain drain”.

Have the courts said NI schools are discriminatory, and ordered them to stop indoctrinating pupils into Christianity?

CLAIM: The High Court has ruled that NI schools’ exclusive focus on Christianity is discriminatory, and said they should teach about other religions as well as Christianity, and should not indoctrinate children.

The High Court found that the core curriculum for RE lacks objectivity and promotes Christianity, in breach of human rights However, the Court made no