> Are only 3 out of 12 regions net contributors to the UK Treasury?

Are only 3 out of 12 regions net contributors to the UK Treasury?

CLAIM: Only 3 out of 12 regions are net contributors to the UK Treasury.

This claim is accurate. Data from the ONS showed that only three regions of the UK – London, the southeast and the east of England – ran a fiscal surplus in the 2017-18 financial year, the latest year for which figures are available.

The Alliance Party launched its Westminster Manifesto 2019 on November 25th, 2019. In a section entitled “Modernising and Re-balancing Our Economy”, the party stated the following:

“Northern Ireland has lost out as the result of a deeply unbalanced economy within the UK. There is a heavy focus around the south-east of England and those sectors which predominate there. For example, only 3/12 UK regions are net contributors to UK Treasury.”

Where does this come from?

The Office for National Statistics (ONS) in their most recent (2018) annual publication “Country and regional public sector finances” stated:

“London, the South East and the East of England all had net fiscal surpluses in the financial year ending (FYE) 2018, with all other countries and regions of the UK having net fiscal deficits.”

They elaborate on this in the context of Northern Ireland:

The chart below shows the total net fiscal balance for each region. (ONS calculates two figures, one allocates North Sea oil and gas revenues based on the population of each region; the other allocates according to where the oilfields that give rise to the revenue are situated.)

What does it mean?

“the gap between total spending (current expenditure plus net capital expenditure) and revenue raised (current receipts), which at the UK level is equivalent to public sector net borrowing”

In short, this is the sum by which it can be established how much a region is costing the Treasury, compared with what they contribute.

When a region costs the Treasury more than it contributes, it is described in terms of a “negative fiscal balance figure”, or as the ONS state: 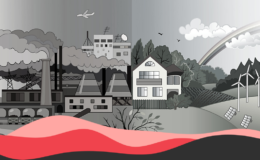