> Do young people have the critical literacy skills they need?

Do young people have the critical literacy skills they need?

“Only 2% of children and young people in the UK have the critical literacy skills they need to tell if a news story is real or fake, according to a survey published today by the National Literacy Trust. What do you think of that?” asked the radio reporter who phoned on Wednesday morning.

The expected answer was a statement about the role of schools and the curriculum in developing these critical skills. However, that’s not where my mind immediately jumped!

“I’m not sure,” I said. “The figure seems very low. And I think I’ve got a lot of questions about who was asked and what they were asked? I’m not entirely sure it fits with other reports I’ve read on youth media literacy.”

The screaming headline from the new report [PDF] from the Commission on Fake News and the Teaching of Critical Literacy Skills in Schools was based on a survey conducted by the National Literacy Trust, who provide secretarial support to the All-Party Parliamentary Group on Literacy who set up the Commission back in September 2017.

How was the 2% figure derived?

Between September and November 2017, 388 primary pupils and 1,832 UK secondary students were surveyed (along with 414 teachers). The report does not specify how the pupils were selected, nor how they were spread across the UK geographically, and the statistical significance/tolerance is not mentioned.

The pupils were asked to pick out the real and the fake from six stories presented on screen. They didn’t know that two were fake and four were real.

1.9% of children (3.1% of primary pupils, 0.6% of secondary students) could correctly identify all six stories. This perfect score seems to have been translated into the headline conclusion that these were the only children with “the critical literacy skills they need to tell if a news story is real or fake”.

Yet the report goes on to explain that over a quarter (28.4%) identified 4 or more stories (real or fake) correctly.
And forty percent (39.2%) correctly picked out both fake stories (but also labelled some of the real stories as fake).

40% of children and young people in this survey demonstrated critical thinking and spotted two fake news stories planted amongst four real ones, perhaps displaying an over-skepticism that meant they misidentified some of the real ones!

60% of children and young people could not detect the two fake stories sitting alongside four real ones in our survey.

Those are very different conclusions.

The radio discussion around the report and its implications begins 43 minutes into BBC Radio Ulster’s Talkback programme on Wednesday 13 June.

One rule of fact-checking is to look for other sources of similar information to compare a claim with.

The Commission’s report mentions a 2017 Channel 4 survey of UK adults which found that only 4% of respondents could identify all stories in a selection of six correctly. So the Commission’s 2% figure is in a similar range.

However, the need to get all six correct is rather perfectionist and not terribly real-world. Particularly since the children surveyed neither had the option to say ‘I’m suspicious’ or ‘I’m not sure’, nor to have a conversation with someone about their doubt, nor to quickly perform some internet searches to further assess the veracity of what they were reading.

Ofcom’s 2017 Children’s Media Literacy Research [PDF] found that around 60% of 12-15 year olds reckoned that the news the saw on TV, heard on the radio, and were told by friends and family was always or mostly reported truthfully. However, for news on apps or social media, this level of trust dropped to a third. 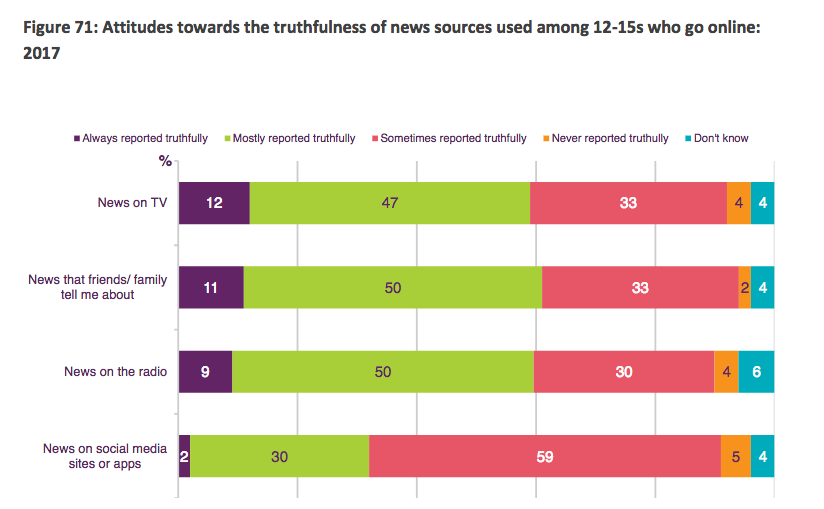 However, only 37% of 12-15s using social media as a news source would questions whether a social media story was true.

So there is clearly work to be done to boost critical thinking in young people.

Over the last couple of weeks, thousands of Year 10 children in Northern Ireland will have sat their GCSE English Language exams. CCEA’s new specification for English [PDF] which was examined for the first time this year includes a section:

analyse critically and assess evidence to understand how information or evidence can be used to serve different purposes or agendas, for example assessing the use of language in media texts

So teachers prepare children to discuss objectivity and bias; fact and opinion; propaganda, parody, hoax and lies.
Of course lies can be blatant lies, partial lies, or lies by omission. Perhaps the Commission’s headline falls into that last category, misleading by the omission of the healthy scepticism displayed by 40% of pupils.

There’s still no room for complacency with 60% of pupils not detecting the two fake stories.

On top of its core fact checking service, FactCheckNI offers training in schools and colleges as well as in community groups and other organisations. The short sessions encourage critical thinking and offer practical techniques to quickly test the veracity of what we read and hear. Contact us if you’d like to book a session.

With so much news being consumed online through the plastic-covered electronics glued to our hands, we are bombarded with stories and click bait headlines. At the same time, the same devices – in collaboration with our curious brains – can help us answer some simple questions about what we are being told.

12 January 2022 Ms Susan Wojcicki, It’s been almost two years since the COVID-19 pandemic started. The world has seen time and time again how

FactCheckNI are recruiting an editor! FactCheckNI is Northern Ireland’s first and only dedicated fact-checking service. We investigate claims and publish articles on contemporary and contentious topics.

Some suggestions when handling COVID-19 leaflets

A number of leaflets about COVID-19 vaccines and their safety have been circulating in Northern Ireland. FactCheckNI has previously fact checked many of these claims.