CLAIM: The nationalist vote in Northern Ireland has not increased since 1998.

RATING: Accurate? Inaccurate? Neither? Maybe a little bit of everything?

On May 18, DUP MLA Emma Little-Pengelly tweeted: “A gentle reminder, the nationalist vote has not increased since 1998.”

She received the following reply: 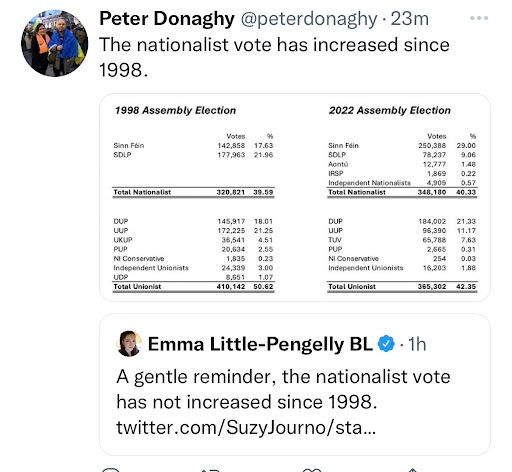 Statistical significance is the idea that some change in some specific data under different circumstances (including through the passage of time) is not a matter of coincidence.

In other words, the change is not simply random chance – what is sometimes called “statistical noise”. Instead, the altered circumstances have very likely played a role in the change in data.

For example, if you plant 1,000 hardy perennial wildflowers in a field one year and the next year only 983 grow, you would not say that your wildflower meadow faces inevitable decline.

That’s because it’s unlikely that such a small reduction in blooms is statistically significant. Your meadow might be doomed – you might have been freakishly lucky to get that many flowers in year two – but you wouldn’t conclude that from the available information.

A similar thing can be seen when considering the percentage of seats won by nationalist candidates in NI Assembly elections since 1998. 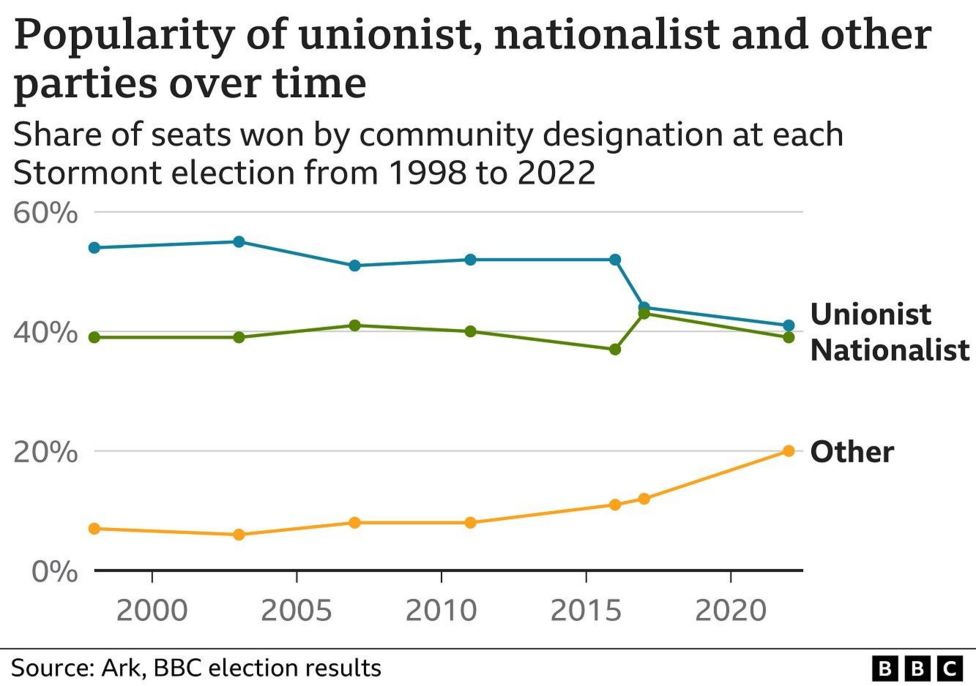 Pic: From the BBC

You could point out the fact that the green line goes down and up, up and down. Or you could say it’s basically flat and that all the variations are just noise, and not statistically significant.

If you want a more formal, more strictly accurate and more unwieldy explanation of statistical significance (featuring the null hypothesis, p-values, confidence intervals – all the hits) this primer from National Centre for Biotechnology Information in the USA is about as clear as you are going to get.

Not a Fact Check

We could have fact checked Emma Little-Pengelly’s claim, or the counterclaim (note that the people involved carried on their discussion and found common ground re. statistical significance).

In this example, the context is actually far more illuminating than any rating. Hence, this is not a fact check.

Would it cost the Irish government £880m to provide free GP care?

CLAIM: Provision of GP appointments that are free at the point of delivery would cost the Dublin Exchequer an extra £880m per year.

On 17 January, crossbench peer Lord Kilclooney claimed: “To provide free GP care in the Republic of Ireland, which already exists in NI as it

Are an average of three women killed by men each week?

CLAIM: On average, three women are killed by men every week, while one in four women has been a victim of rape or sexual assault at some point.

On 11 January, Alliance MLA Kate Nicholl tweeted: “In a society where 3 women are killed each week by a men and 1 in 4

Was Northern Ireland part of the Irish Free State for a day?

CLAIM: Tánaiste Leo Varadkar claimed that, on 6 December 1922, Northern Ireland was both already in existence and technically a part of the Irish Free State.

On 6 December, Ireland’s Tánaiste Leo Varadkar said: “Article 12 of the Treaty [the Anglo-Irish Treaty of 1921, which created the Irish Free State] created